A (scouts) clubhouse in the Swiss Alps; or: what came into my mind when hearing the term before 2020 (source: private).

Preliminary remark: this article was first published on medium.com on January 25, 2021.

It took me a couple of days to realize what that sudden Clubhouse buzz in my Twitter feed was about. I was just recovering from the shock I had when I realized that the messaging service Signal, which has been hyped as a privacy-friendly alternative to Whatsapp, notified anyone who had my phone number in their contacts about my joining (if they had activated that notification option).

I had hardly come to terms with this worrying feature of Signal, when Clubhouse started to trend across my social media feeds. After its launch in Germany at the beginning of this year, it immediately climbed to rank 2 of the app store download charts. Ever since I have started to inquire about the workings of this latest social media app, my mind has been buzzing…I am puzzled.

How is it possible that an app that simultaneously breaches privacy principles and that, for the time being, undermines ideals of inclusiveness, is so successful? And why do even people who are usually strong advocates of the very values Clubhouse violates, hop on this latest trend?

I first tried to get answers via a poll on Twitter. Yet, the ‘voter turnout’ was so low that even I as a Swiss citizen who is used to widespread voter apathy, had to acknowledge the irrelevance of the results. 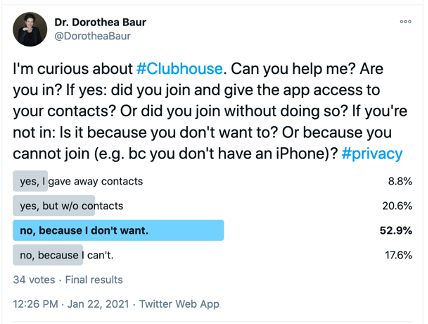 So, instead of hunting down empirical truths, let me share some ethical considerations. I am going to focus on the privacy aspect here, from an ethical, not a legal point of view. The aspect of currently being limited to people with iPhones and of operating on an ‘invite-only’ basis merits another article.

The ethically most challenging behavior stems from people who opt in to give Clubhouse access to all of their contacts. These people are intruding on the privacy of others without their agreement. If I was in your address book, I would not have agreed to you sharing my phone number with an app that uses it for whatever purpose. Just like I didn’t agree that Signal sends notifications to people who have my name in their address book. To highlight the bizarre consequences of giving apps access to your contacts, consider the following example from Cennydd Bowles’ book Future Ethics (p. 78):

an unnamed psychiatrist found Facebook’s People You May Know algorithm suggested her patients befriend one another… The most likely explanation? Each patient had added the psychiatrist to their phone’s address book. Facebook then assumed that since these patients share a mutual friend, they might like to know each other

In the case of the psychiatrist this violation was particularly threatening because his patients included people who tried to escape violent relationships. But it does not take a lot of imagination to think of other ‘embarrassing encounters’.

People who give away of all their contacts to Clubhouse, can be considered ‘violators’. One might be tempted to classify the eagerness to join Clubhouse as another instance of the ‘privacy paradox’, i.e. the discrepancy between our intentions to protect our privacy and our actual behavior online. But the Clubhouse model goes beyond the privacy paradox. The issue is not whether those who join protect their own privacy but whether they are willing to breach the privacy of their contacts. For people who are entirely ‘privacy-agnostic’ this behavior might not constitute a paradox. For those, however, who claim to care about privacy, it counts as a breach of their moral integrity.

To be fair, not everyone who joins Clubhouse is equally thoughtless or even ruthless. Many people say they joined Clubhouse without providing access to contacts. They thus value the privacy of their contacts (and their own privacy, i.e., the right to keep their contacts a secret) higher than the urge to come across as particularly popular or generous. These people do not violate the privacy of their contacts, and even though we might want to take this for granted, we should thank them for that.

However, by joining a platform that actively encourages privacy violations and whose fast growth depends on such violations, we can call these people ‘accomplices’. At least those who organize events on Clubhouse to increase their professional visibility and to promote their content are likely to gain from the privacy violations of other people. They benefit from an audience that would be significantly smaller if no one had violated the privacy of their contacts. The situation might be judged differently if you are only listening.

One final point: when countries all over the world launched coronavirus tracing apps last year, a lot of jokes were made about people publicly ranting about alleged privacy threats of these apps on Facebook. Until today, tracing apps whose purpose is to mitigate a public health crisis, and which include strong privacy protection mechanisms, struggle to get the uptake needed in order to be effective. At the same time, a new social media app, breaching all kinds of privacy principles, gets launched, and one of the purported reasons for restricting access is to protect its technical infrastructure from overload… What can I say? I’m confused; and I hope I am not the only one.