The market only accepts bunches of 5 perfect bananas. 50% of the mini bananas in Costa Rica go to waste (source: private)

Note: This article was originally published on LinkedIn on May 26, 2017. This version has been adjusted slightly to match current events.

The food waste of bananas created by consumers is only the tip of the iceberg. Even more waste is created at the farm level, where up to 40% of bananas are put to waste. As this short clip from Australian ABC TV argues this is due to ‚strict supermarket regulations’.

While supermarket regulations, which by the way mostly reflect expectations of the consumers, do play a role in this, the clip blinds out other reasons and it does not mention alternative ways for dealing with the bananas that don’t match the strict standards:

All in all, it is true that retailers do play a role in creating food waste on farm level, but they are not the only ones to blame. On the one hand, as stated above, esthetically motivated regulations often reflect consumer preferences; on the other hand, the specific circumstances during ocean transport also play a role. Instead of directly putting imperfect bananas to waste, we should consider alternative ways of using them – be it as puree, as a source of renewable energy, etc.

However, more critical is once again, the relation between food waste and price. As stated in my previous post, the very low retail price of bananas most likely exacerbates food waste by consumers.

The high percentage of waste at farm level puts an additional strain on the cost/income ratio of farmers: with the money they get per kilo they sell, the farmers also need to cover the costs of the 300 grams put to waste. If we factor the waste into the retail price this means that while we might pay 1 Euro per kilo of bananas consumed, the farmer in fact gets only 0.76 Euro per kilo of bananas produced. Let’s think about that the next time we grab at the ‘super fresh super bargain bananas’! 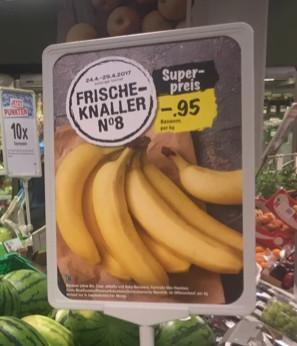